When imagining Vietnamese cuisine, most probably it is gonna be around the great noodle soups. The most known is probably Pho, which means wide noodles in Vietnamese. This recipe is about soup made of thin noodles, called vermicelli, in Vietnamese Bun. It is an amazing combination of duck meat, bamboo shoots and radish.

Bring dried bamboo shoots to a boil. To soften properly and get rid of their unpleasant odour it is important to change the boiling water every 15 minutes. 3 times altogether should be enough.

Cook noodles according to instructions on the pack.

If you want to make sure there is nearly no fat in your broth, make it one day in advance, let it cool down overnight in the fridge and then remove the white fat easily.

All other ingredients put into the soup just before serving. If the noodles are already cold (which is very common in Vietnam, as local usually buy them precooked already on the market), dip them few times together with mung sprouts in hot water using strainer.

Take a deep plate, place there noodles with mung sprouts, put on duck meat, bamboo shoots, spring onions, fried onions and fresh herbs. Fill the plate with broth, pepper, add red chiies and serve with sweet chili sauce on the side, lime to flavour it up and a salad from fresh Vietnamese herbs and white cabbage. Add some fish sauce to taste too. 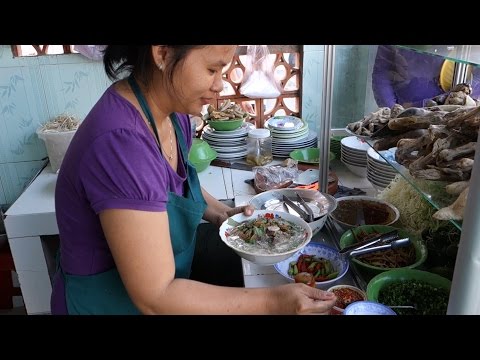 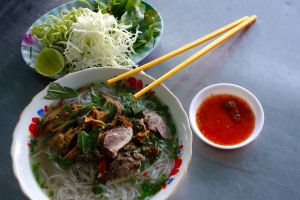 For completing the soup:

As a side dish: